Investor and “116th Forbes” Ruben Vardanyan in an interview with RBC spoke about what kind of Armenia should be built, about the phenomena revealed by opinion polls, and the readiness to be “both a cleaner and a leader” of the country 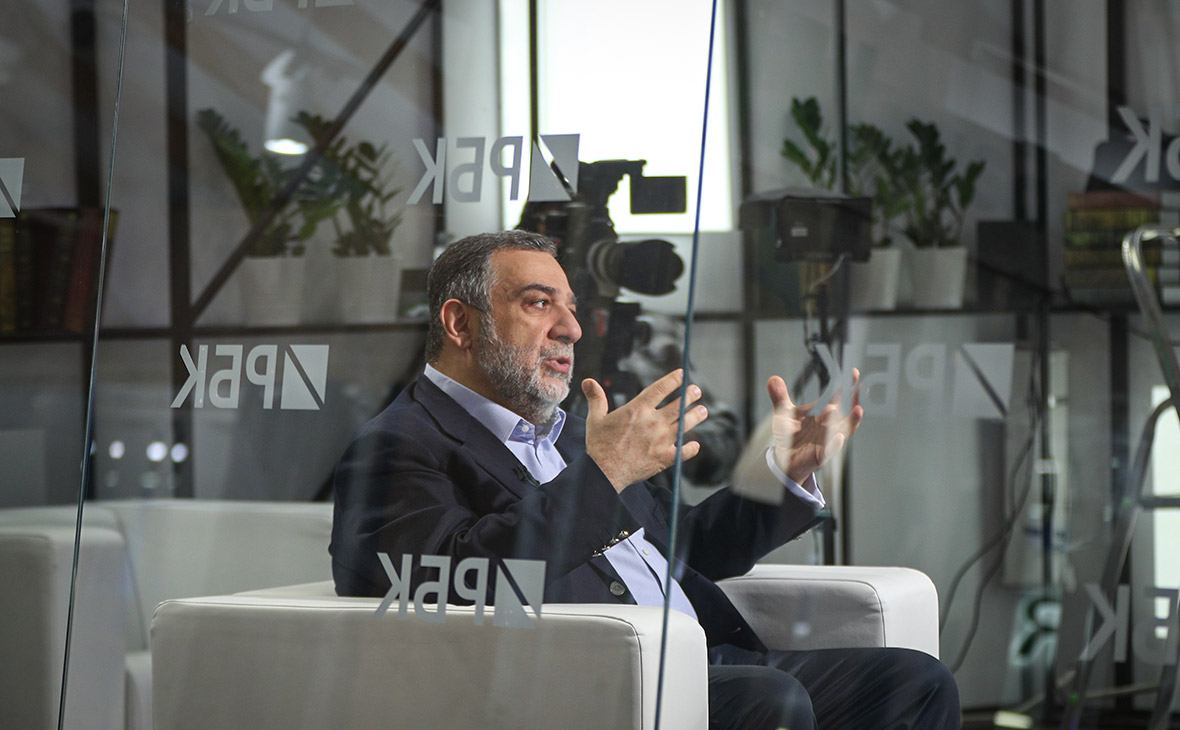 On the dominant mood in Armenian society

“ Firstly, it must be admitted that the war left a very serious deep imprint on the consciousness of Armenians both inside Armenia and outside, from the point of view of the awareness that there was a defeat. And in this sense, November 9 was such a cold shower, but an important moment to understand where we are. On the other hand, it must be said that the state of neither peace nor war, in which we lived before the hostilities, unfortunately, remained after. It seems that there is an agreement on a ceasefire, and at the same time some incomprehensible things are happening. The third, of course, is the political crisis that has been going on throughout this year within the Armenian society, including with an attempt to change the government, and in different forms. It was an important event for the whole of Armenia and the Armenian society as a whole, in which, it seems to me, quite serious changes have taken place. Because the society said: “ Yes, the current government has lost. The current government is to blame for many of the problems that have arisen. But nevertheless we do not want to go back, we do not want to go back in time, we believe that this page has been turned. ''

“ We saw how three groups were very clearly formed in society. One group, unfortunately, is completely disillusioned with everything, does not see any future, and is by and large in complete depression. The second group said, “I’m in a house, I’m hiding, I’m in a bubble in which I want to hide from all this reality, I don’t want to hear anything.” And a small group that said, “No, we want change, we want change. Let's draw conclusions, let's analyze what went wrong. In the end, let's calmly analyze, understand the reasons and do everything so that this does not happen again. ''

“ We have been doing regular surveys together with international experts since December last year. For the fourth time, every three months we conduct a survey of what is happening in the Armenian society. And the result shows that, despite the severity of the situation, including not only the military, but also the economic and pandemic, the majority of people, this is about 70%, are more likely to be satisfied with their lives than not satisfied. And this is a phenomenon that was difficult to imagine, because we see that people live very poorly and very badly. This is a dangerous signal that society survives, lives every day to survive, and that's it. And this is such a state of society from which it is very difficult to withdraw. People have lost their inner drive that something can be changed at all. ''

On the search for a way out of the impasse

“ The country does not change systemically. And everyone understands this. But here's what to do & mdash; this is the last question being asked. What kind of Armenia should be built? How should we in this situation become strong, powerful, happy, with long-term projects? There is practically no talk on this topic. And this lack of a culture of in-depth discussions about what kind of society we are building, what country we want to see in a year, five years, ten years, of course, is a big problem, because people need to be shown landmarks. ''

“ There is no state thinking, which manifests itself in the fact that, when deciding about your life, about your future, you focus on several important things: what is important for me, for my family, for my nation and for my state. Lack of understanding that the state & mdash; this is a friend, this is a partner, this is the institution with which I can work and cooperate, & mdash; this is a great danger, and not only in Armenia. In general, the Armenian says that “I can live anywhere in the world.” Therefore, we are in fact a truly unique nation that achieves success in all parts of the world, not only in Armenia. But this is both a plus and a minus. Because a person says: “ I can easily move to another country, adapt and live there. ''

“ It's been 30 years since we gained independence. We have dreamed of a sovereign Armenia for centuries. We got it. And how do we manage this? To what extent did we manage to make an effective sovereign state, which is really a very important magnet for the nation, uniting very different Armenians from different parts of the world, living in different parts of the world? I think this is a very serious challenge. And when you go through defeat, you have two options. Either you resign yourself to defeat, or you understand what needs to be corrected, how you need to train again, change, what resources you need to use in order to become strong and powerful, shake yourself up and say: “ We want to build a strong state. We want to build an effective relationship between the public and private sector. We want to build effective relations between Armenia and the diaspora. We want to build effective relationships between business and society as a whole. We want to build a relationship between church and state, between people who look at different issues in completely different ways, but at the same time are united by some single idea in the future. ''

“ We need to look at what is happening in Armenia in a fundamentally different way. For example, we will soon, realizing that one of the problems in Armenia & mdash; this is education, we are launching a center for leadership and personal development. Since we consider it fundamentally important that there is a powerful educational center, so that Armenia has the opportunity to provide an international level of education in business, in management, in public service, that is, in government, at a completely different level. And this is a question, it was necessary to concentrate resources and do it. We are going to launch in the coming week the Center for Strategic Development, which we consider to be of fundamental importance, in which the best resources both inside Armenia and outside will be involved. Such projects are simply needed to make people feel that they are not just separate efforts. ''

About Ruben Vardanyan and his real aspirations

'Ruben Vardanyan has already been accused of all mortal sins. And that I am the new Ivanishvili of Armenia, that I am Soros for Armenia, that I am a Turkish agent. So many things I haven’t heard about myself over the past few months, which was to be expected, because society has accumulated a negative attitude towards everything. ”

“ Ruben Vardanyan has always been in Armenia all these years. That is, I don’t have a business there, but for all 20 years, since 2001, when we started the Armenia 2020 project, I have been spending a lot of time in Armenia. On average, two to three months a year, on visits. I am deeply convinced that in order to change the situation in Armenia, which, I am sure, can be changed, it is necessary for ten best doctors, ten best scientists, ten best businessmen, ten best designers, ten best architects to move to the country. And if I urge others, of course it should apply to me. ''

“ Yes, I am going into Armenian politics. But this is something other than just a political party, a desire to lead the country. Want to lead the country in its current state & mdash; it must be an illogical person. Because the country is in a very difficult condition. The real future is completely incomprehensible. Society is completely split. And in this sense, take responsibility for becoming a leader & mdash; you have to be a very brave and risky person. ''

“ If the elite that consolidates and together thinks that this is the right decision, so that there is something else, '' any solution is possible, because I am ready to be both a shoemaker for my nation, and a cleaner, and a leader. ''

“ I believe that the maximum benefit of Ruben Vardanyan is that he the past, both from the present and from the future generation, which also indifferently sits and watches. ''

About the program of concrete actions

“We have to diagnose correctly what happened. We did it, we have very serious work done. We understand all our illnesses. Second, we definitely need to unite the efforts of people who are not indifferent, who are ready for changes. Next is the third & mdash; together to work out the program that will lead to changes and really give an opportunity to get out of this crisis. ''

“ Now is the second stage. And he's very important. I want people who are not indifferent, who are ready, like me, to sacrifice their well-being, their normal life, their usual way of life, to say: “ I am ready to move to Armenia. I'm ready to stand next to you. I am ready to go to serve in the army and defend Armenia. I am ready to do everything to ensure that there is peace in Armenia, but at the same time there is strong security. '' Yes, of course, having united, we must work out an agenda, this is also a very important issue, and then it will be clear on this agenda. ''

“ We have already created a strategic development center, which develops a program of specific changes. In the near future, a center will be created, associated with changes in state governance and, in general, everything related to the management of future institutions. There are special teams of lawyers who work only on how to make things that need to be changed. Because it’s not that easy. ” Simply by properly building the economy and all the processes that need to be built. I am deeply convinced that we can attract 50 thousand families who will come to Armenia and who will add energy and change to the very dignified people living there. I am deeply convinced that we can build a very strong army, which at the same time will not only protect, but will also be the engine of economic change, because it will be a technologically completely different army, and it will be an army that will order technology. I am deeply convinced that we can have a completely different level of Armenia's positioning in the world. ''

Subscribe to RBC's Telegram Receive news faster than anyone