Together with Nazarbayev, Dariga was removed from the leadership of Nur Otan

At the same time, Tokayev sang praises to his predecessor

President of Kazakhstan Kassym-Jomart Tokayev became the new head of the ruling Nur Otan party. Thus he concentrated in his hands all the formal power in the republic. Tokayev continues to promise Kazakhstanis liberal reforms, but experts believe that behind his words lies the same policy that was previously pursued by the previous leader of Nur Otan, Nursultan Nazarbayev. The only difference is that Tokaev has less authority and no team to rely on.

The Nur Otan congress was held behind closed doors and in a remote format. Apparently, the January protests had an effect, during which the “party of power”, named after Nazarbayev, turned out to be one of the first targets for popular anger. As a result of recent events, people began to leave the party en masse. Recently, in Semey alone (formerly Semipalatinsk), 150 people left Nur Otan.

“Nur Otan” for Kazakhstan as “United Russia” for Russia is the core of all state power, on top of which the leader of the nation should shine. It is not surprising that many in the republic have recently wondered whether Tokayev would head such an unpopular structure, or would he create a new one?

The answer was received literally in the first minutes of the congress. Tokayev not only became the new leader, but also said that criticism of Nazarbayev was unfounded. Elbasy, of course, had shortcomings and blunders, but all political leaders, not excluding the greatest ones, have them, but Nazarbayev’s merits, according to Tokayev, are beyond doubt.

Tokayev spoke about how, in the difficult 1990s, Nazarbayev saved the country from collapse, how wisely he acted when he moved the capital, made Kazakhstan the leader of the anti-nuclear movement, and so on. The successor of Nursultan Abishevich described the achievements of the first president in such detail that at some point it even seemed that, like 2 years ago, he was ready to offer to rename some other city in his honor.

But Nur Otan was not so lucky in Tokayev's speech. The second president assures that the party is waiting for a global reboot and renewal. In the future, Nur Otan will not replace the work of state bodies, but will engage in ideological work, become a forge of personnel (including developing a youth movement), and only in some cases will direct the work of the state apparatus. Tokayev said that at the end of 2022 he could resign as head of the party in order to achieve the principle of equidistance of the president from all political forces. However, this did not prevent him from abolishing the post of deputy chairman of the party. That is, the second president will lead his party remotely, but alone. 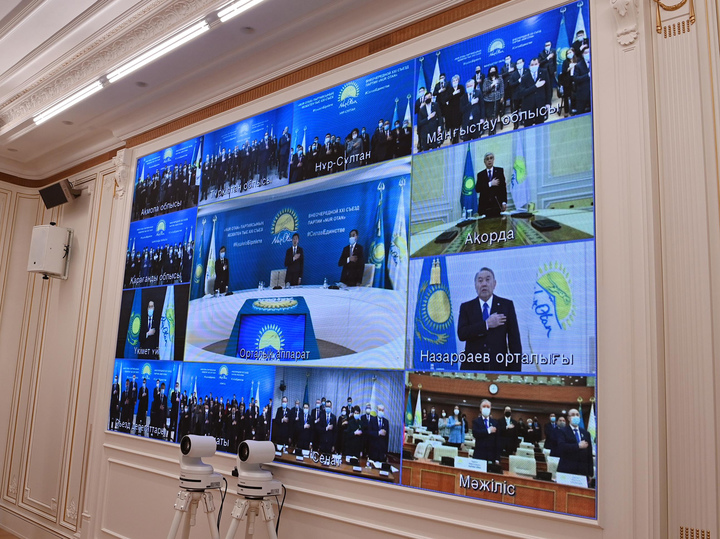 As a result of the congress, it became known that Nazarbayev's eldest daughter Dariga and one of his closest associates Bauyrzhan Baibek were expelled from the party leadership. At the same time, one of the people closest to Tokayev, the State Secretary of Kazakhstan Yerlan Karin, did not enter the political council of Nur Otan.

“Tokayev agreed to lead the party because he needs additional leverage to govern the state. At the same time, he will use the party to form new political values. As for the political council, perhaps Tokayev decided to separate officials from the party. There should be people in the party who no longer hold other positions, they will be fully focused on the activities of Nur Otan. The liquidation of the position of the deputy chairman suggests that he intends to personally deal with the work of the party,” Kazakh political scientist Tolganai Umbetaliyeva told MK.

Kazakh political analyst Ainur Kurmanov believes that for now, Tokayev is only concentrating power in his hands, and he needs Nur Otan to rely on the party as the backbone of the republic. “From there, they decided to remove the most odious personalities who can cause strong negative moods among most of Kazakhstani society. The authors of this idea are thus trying to correct the image of the party, which is now rapidly deteriorating. We are witnessing the exit from the party of both ordinary members and deputies, – Kurmanov told MK. – As long as Nur Otan is alive, the political system built by Nazarbayev will also live, because they are inseparable from each other. It will not be forgotten that Tokayev himself is a part of it. In this regard, we can say that some influence of Nazarbayev on the party will always be preserved. It is no coincidence that now they are only amending the law on the first president, but not completely liquidating it”

Kurmanov believes that even if Tokayev had a desire to dismantle the system of power built under Nazarbayev, he would not have it's strength. “We would have to remove all Nazarbayev’s nominees altogether, and this is literally everyone who is in power today, including the second president,” the expert believes.

In his opinion, Tokayev has already taken control of all the levers of power, but he still lacks his own personnel in the field. He will deal with this problem for the next six months, and then they may announce political reforms.

“Tokayev does not and probably will not have authority comparable to that which Nazarbayev had in his best years. Therefore, in the fall of 2022, the second president may begin to form a new parliament that will represent the interests of not only the president, as was the case under Nazarbayev, but various oligarchic groups. Tokayev himself will act as a mediator between them,” Kurmanov said.